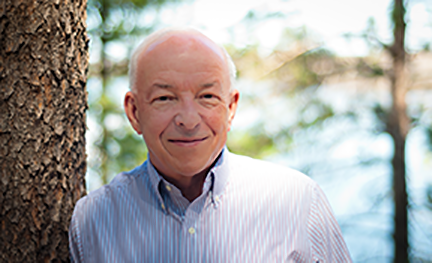 Bob Carpenter is a numbers guy and understands the value of a dollar, particularly when carefully invested to benefit local communities. He is a CPA by profession and has served on the North Central Michigan Community Foundation (NCMCF) board of directors since it was founded in 1997. His company, Robertson & Carpenter CPAs, P.C. has offices in Rose City and Mio. Carpenter manages the Mio office and has been providing professional accounting and auditing services in Northern Michigan for 30 years.

Asked about his involvement with NCMCF, he said he has always been civic minded and the Community Foundation has enabled him to give back to his community in a meaningful way. While he grew up in Jackson, Mich., he and his wife, Bonnie, have made North Central Michigan their home since 1977. He was fortunate to grow up in a neighborhood where people took care of each other. That sense of caring and doing for others has stayed with him throughout his life. He also serves on the Intermediate School Board (for 36 years), the bank board, and is very involved in his church.

The Carpenters raised their three daughters in Mio, Mich., and have been married for 42 years. Their daughters include Jaime, a pharmacist; Libby, a medical doctor; and their youngest, Stephanie, a teacher.

His high level of involvement in the community has given him a very strong sense of the needs in the area and he knows most of the business owners as well. He is concerned about the number of young people who have moved out of the area since the recession.

Carpenter has been instrumental in helping set up several scholarship funds over the years, but one that particularly stands out for him is the Sharon Sutton Memorial Scholarship. Sutton lost her life early to breast cancer while her daughter was a student at Fairview. He works with the school counselor to select recipients for the scholarship which is the last to be awarded each year.

After talking with Bob, it’s easy to observe that he has a big heart, lots of determination, and when he makes a commitment, he sticks with it. Even after having two hip replacements, he is ready to get back into the swing of his golf game again.