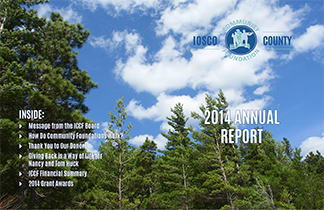 The Iosco County Community Foundation (ICCF) board of directors is pleased to share with you that 2014 was a big year for increases in both gifts and grant awards. Our total assets were up by more than $300,000 as of December 31, 2014, topping $5 million.

The Iosco County Youth Advisory Council, made up of students from 12 to 21 years old, awarded $7,900 in new grants that were announced in early April 2015. Called YAC grants, they are for programs and projects that benefit Iosco County youth.