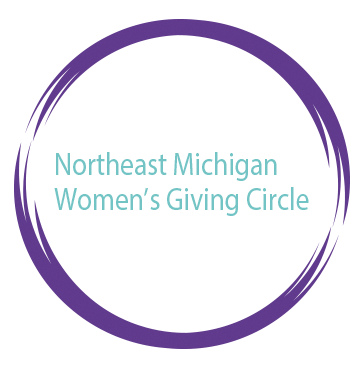 Would you like to join other Northeast Michigan women who care about making a lasting contribution to our communities? Anyone can be a part of the Women's Giving Circle. You can make as small or large a contribution as you would like. Women, and many men, have joined the WGC, pooling their resources to make a bigger impact together.

This year, we celebrate the "Sweet 16" of the Women's Giving Circle! Check out our special "Sweet 16" edition of our annual report to WGC members.

ABOUT THE WOMEN'S GIVING CIRCLE

Established in 2006, the Northeast Michigan Women's Giving Circle (WGC) Endowment Fund was established by the Community Foundation for Northeast Michigan (CFNEM) Board of Trustees. Under the direction of then Program Director Julie Wiesen (retired in 2020) and Marketing Communications Director Christine Hitch, the Women's Giving Circle was created to encourage community philanthropy among women (and men) to support issues important to the women of the region; specifically, for Alcona, Alpena, Montmorency and Presque Isle Counties.

In its first year, 30 donors gave the the new WGC Endowment Fund becoming the first WGC members. Additionally, the Foundation offered the opportunity to become a Founding Member, giving that designation to WGC members who gave a cumulative total of $1,000 or more in the first 18 months of the Fund's existence. The WGC has also provided an opportunity for its members to get directly involved in grantmaking. Each year, a committee of ten WGC members review grant applications and make recommendations to the CFNEM Board on behalf of all WGC members and in good stewardship of the Fund. In 2007, the first year grants were awarded from the WGC Fund, $700 was given to local nonprofits with projects supporting issues important to the women. Through the power of collective giving, sound investment strategy, and the foward vision of our WGC members, the Northeast Michigan Women's Giving Circle Fund now has nearly $700,000 (as of 5/31/2022) in assets and is currently awarding over $30,000 annually. As the Fund continues to grow through investment income and the continued, sustained giving of many of our WGC members, the amount available to grant to our communities from this Fund will grow as well.

How the WGC Endowment Fund Works

The first donation, and every subsequent donation made by our members to the WGC Endowment Fund, are invested together. These donations make up the principal (or corpus) of the fund. The principal remains untouched and is instead invested in the Community Foundation's general investment pool with the rest of the Foundation's assets. Each year, 5% of the funds total assets (calculated over a 12-quarter rolling average) is available for WGC grants. That 5% is based on the Foundation's current spending policies which are in place to maintain the Fund's principal, protecting those assets in perpetuity while still ensuring grants are available to carry out the WGC Fund's purpose. As the Fund grows through investment income and additional donations, the amount available to grant each year increases too.

How to Become a Member

To be a WGC member takes one donation of $10 or more. Your initial gift makes you a permanent member, and continued support will increase your cumulative giving total, possibly placing you at a new giving level. Gifts can be made

Giving levels are based on cumulative totals as follows:

All WGC members are permanently recognized on our website here. In addition, a permanent display at the Community Foundation headquarters will (in 2023) display all Founding Members, Diamond Level Members (with room to grow), and a digital display recognizing WGC members who have given within the current calendar year.

If you are a current WGC member and would like an update on your own cumulative giving totals, please contact Christine Hitch at chitch@cfnem.org.

Our WGC Grant Screening Committee is made up completely of WGC members. In this unique setup there are always ten WGC members serving at a time, with five new members chosen each year at random from those who are interested while another five end their term. Each committee member term is two years in length. Responsibilities include reviewing the annual grant applications online (late-July) and attending an in-person or virtual meeting of the committee to discuss and determine final recommendations for the WGC grants for that year (early to mid-August.)

If you are interested in serving on the WGC Committee, we want to hear from you! Please contact Christine Hitch at 1-877-354-6881 or chitch@cfnem.org to get on the volunteer list for the WGC grant screening committee.