Some stories emerge from the most difficult of times, but through grief, stories of incredible people, their lives, and their passions are transformed into a legacy by those they love. 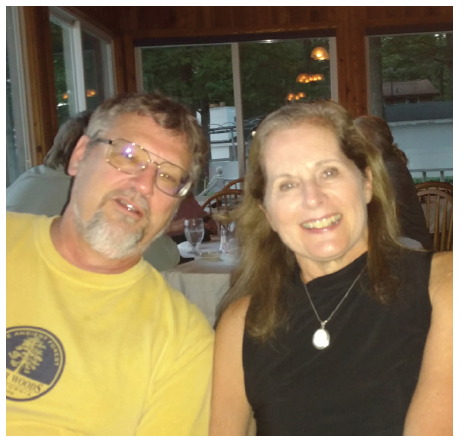 Such is the situation that found Michael Mandrick searching for a way to honor his wife, Julie, who passed away unexpectedly in 2019. In the first days after losing his wife, amid grief and tragedy, Mandrick was searching for ways to make something positive and lasting come from the situation.

Mike and Julie Smith-Mandrick were married for just under ten years. He came into the picture when the first grandchild of Julie’s was born of her three children, and he fully embraced the role of grandfather. Now, there are six grandchildren in the family.

Mike is retired from the Michigan Department of Transportation, with the marks of his years of work all over northeast Michigan. Julie spent much of her career working with young children through her in-home day care, and later as a home visitor for the Early Headstart program at the Northeast Michigan Community Service Agency (NEMCSA).

“She received a degree in Early Childhood Development from Spring Arbor,” said Mandrick. “That parlayed into her job at NEMCSA, and this was the job she loved; working with children under three years of age and their families, trying to provide a sounding board, informed parenting, and monitoring the milestones of very young children.”

With some familiarity with the Community Foundation, Mandrick decided to establish a named, endowed fund to honor his wife and her great passion for children.

“I decided on a fund to further early childhood development,” said Mandrick. “I felt there were plenty of scholarship funds available, and wanted something that could embrace the children themselves, as that was Julie’s passion. I do not know for sure where that started, but her family is very much about children.”

The Julie Smith-Mandrick Early Childhood Education Fund was established and was flooded with donations almost immediately from those whose lives Julie touched. It is Mr. Mandrick’s hope that rich, meaningful opportunities to support young children’s development are presented, and to see the fund grow through continued donations.

“Her great interest was children. The best my resources can do is to encourage those interests through the establishment of this legacy endowment,” he says. “I will continue making contributions in the future, and hope to see the fund grow as least fivefold through these sources before I part this earth.” Mandrick says he encourages others to consider an endowment fund.

“If you are fortunate to have resources, a founded interest from some event or circumstance, then take the opportunity to establish an endowment that can realize that interest,” he says. “People who have heard about this fund have expressed overwhelming positive encouragement and support.”