Carl and Helen Basel MSU Scholarship: A Legacy 100 Years in the Making

“Helen, we have to figure out what to do with our money.”

Those are the words Carl Basel said to his wife Helen that started a tradition of giving; one that reflected a love of trees and forestry, and a great passion for northeast Michigan’s people.

Born in Presque Isle County, Carl held northeast Michigan close to his heart, as did Helen. Carl was a U.S. Coast Guard veteran, an avid outdoorsman, and an excellent forester. Helen, whom Carl called “one tough, dear woman”, met her husband

while he was stationed in Philadelphia, Pennsylvania. Carl earned a Master of Science degree from Michigan State University’s Forestry program, and worked as head forester for Alpena’s Abitibi Co. He eventually brought his love of trees and the outdoors back to Alpena County where he and Helen ran a hobby tree farm in Wellington Township, as well as an additional farm in Missaukee County. Together, they planted over 60,000 trees!

Foundation staff had the opportunity to chat with Carl in spring of 2019 as he was approaching his 100th birthday. He spoke often about his father, and the influence he had on so much of Carl’s life.

“The best things he taught me were the importance of two things: honesty and integrity,” he said. “Stick to what you believe in. Learn what you can about something, decide how you feel about it, then when you know you’re right, stand behind what you believe in.”

It was through these lessons, and hard work, that he and Helen found financial success and made incredible memories traveling the globe until Helen developed lung cancer.

“My dear Helen. I tried to get her to stop smoking, but I just couldn’t. You know, lung cancer moves 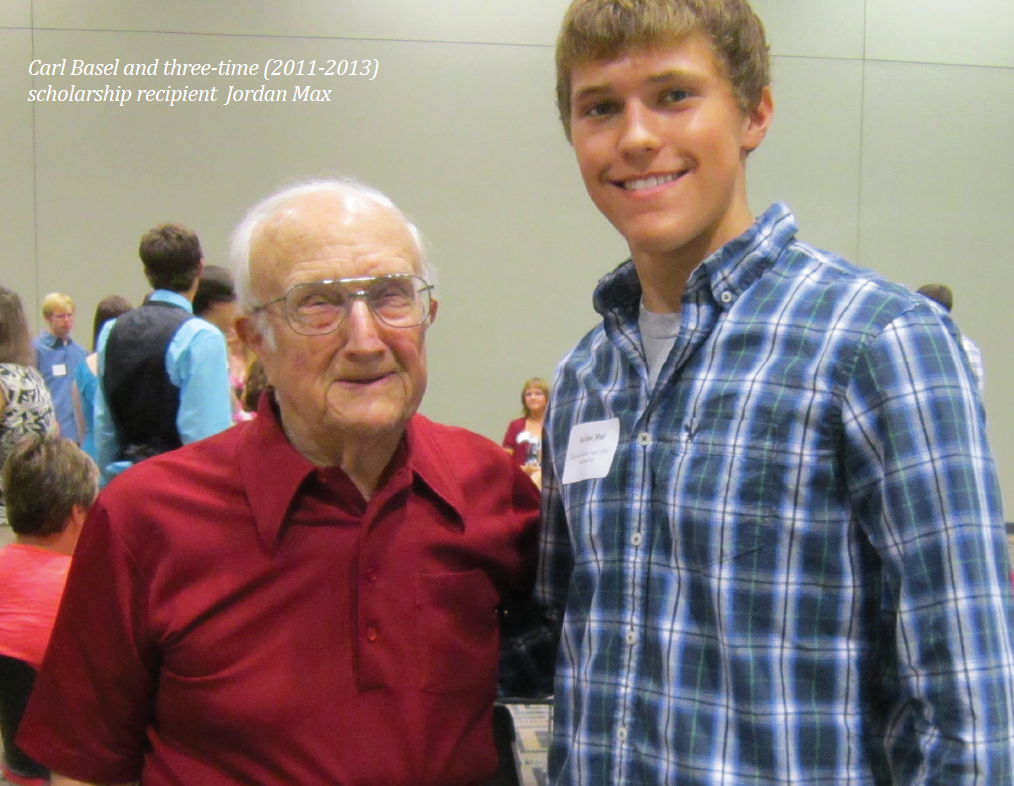 pretty quickly to your brain,” Carl said.  “When we found out about it I said, ‘Helen, we have to figure out what to do with our money.’ We had a lot of fun; we got to do a lot of things together. We never had children, and we didn’t want to just give it all to our nieces and nephews. We love them; and we wanted them to make it on their own the way we did.”

Ultimately, Carl said they wanted to do something good with their money. When they decided to sell their tree farm, they took the proceeds to start a fund at the Community Foundation for Northeast Michigan, the Carl and Helen Basel MSU Scholarship Fund; and another through Alpena Community College. At CFNEM’s annual scholarship luncheons, Carl rarely missed the opportunity to attend and mingle with the students whose educations and futures would benefit from his and Helen’s philanthropic legacy. He embraced the opportunity to witness that philanthropy in action and meet his scholarship’s recipients.

Moved to continue their tradition of philanthropy and help next generations to be successful in the fields that shaped their adult lives, Carl and Helen also established a scholarship for students at MSU’s College of Natural Science in 1995, becoming members of MSU’s Beaumont Tower Society before Helen’s death in 1998. Carl took many opportunities to remember Helen through philanthropy, including in 2007 when he became a Founding Member of CFNEM’s Northeast Michigan Women’s Giving Circle in her honor. In 2013, Carl decided to start an annual Outstanding Service Award in Forestry at MSU, and the Carl O. Basel Endowed Scholarship Fund at the University specifically to support students from northeast Michigan.

When asked about his legacy of giving and hopes for the next generation, Carl (who firmly believed he would not see his 100th birthday), said he hoped they would show the integrity and work ethic he feels is so needed in the world and our communities. Those qualities are what allowed him a successful career, and a tradition of philanthropy for our region, and he was thankful to be able to witness some of its effects during his lifetime.

Carl passed away in May of 2020, eight and half months after his 100th birthday, leaving a legacy for himself and Helen that will last for generations to come.