ALPENA, MI—Taking this year’s Lake Huron Discovery Tour to a whole new level of exploration will be possible due to a recent $25,000 Heritage Grant award from the Michigan Humanities Council. Working in collaboration with Michigan Culture and Arts Northeast Michigan (MACNE), the Community Foundation for Northeast Michigan (CFNEM) prepared and submitted the grant proposal in March 2016, entitled “Lake Huron Discovery Tour: Explore Our Native American Heritage.” Of the 68 applications submitted from around the state, 28 were funded and only 15 at the maximum level of $25,000.

“The Heritage Grant awards will fund a variety of excellent projects that bring authentic voices to critical racial, ethnic and cultural issues throughout Michigan,” said Shelly Kasprzycki, Executive Director of the Michigan Humanities Council. “We are honored to partner with the W.K. Kellogg Foundation in this work.”

As noted in a news release issued by the Michigan Humanities Council announcing the 2016 grant awards, “These grants will support a variety of projects that use history and humanities approaches to shed light on present-day social issues as they relate to the intersection of ethnic identity, racial equity and cultural heritage. Each of the projects will bring forward the voices of groups that are often marginalized to share their stories and record their history in ways that are meaningful and impactful in their communities.”

Barb Frantz, CFNEM Executive Director, said the Community Foundation took a lead role in preparing the grant application and became actively involved in the Lake Huron Discovery Tour because its mission and reach is consistent with the Foundation’s. The whole goal of the Lake Huron Discovery Tour is to promote the outstanding natural and cultural resources throughout northeast Michigan and encourage communities from Standish to Mackinaw City to join together in doing so. “We know from the work we do on a daily basis at the Community Foundation that so much more can be accomplished when communities work together on behalf of a shared mission,” said Frantz. 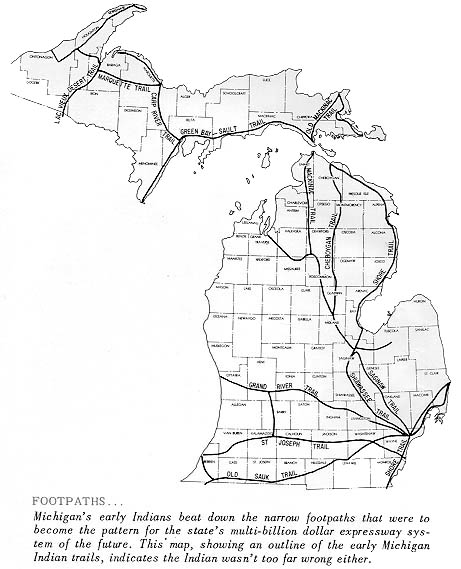 “The first inhabitants of the Great Lakes basin arrived about 10,000 years ago,” according to THE PICTORIAL HISTORY OF MICHIGAN: THE EARLY YEARS, by George S. May (1967). Some “have estimated that the population of Native Americans in the Great Lakes was between 60,000 and 117,000 in the 16th century, when Europeans began their search for a passage to the Orient through the Great Lakes.” By 1820, the tribes had lost claim to over half of Michigan’s Lower Peninsula. Rediscovering and sharing the rich Native American history and culture that helped shape northeast Michigan is the focus of the Lake Huron Discovery Tour Heritage Grant initiative.

“We are so thankful for the Michigan Humanities Council and the W.K. Kellogg Foundation’s partnership that is making the Heritage Grant program possible. Our Native American heritage is an important part of who we are as today’s stewards of the Lake Huron watershed,” said Katie Wolf, CFNEM marketing communications director and the grant writer.

“This initiative is committed to helping our communities, school children and visitors learn about and better understand the important contributions Native Americans have made to our region. It truly takes the Lake Huron Discovery Tour to a whole new level of exploration for those who have lived near the shores of Lake Huron their whole lives and want to know more about our region’s Native American roots, as well as those who are just now discovering what a truly fascinating area northeast Michigan is,” added Wolf.

Since the grant award was announced in late May, a significant amount of research has already begun with over 20 recorded interviews with local Native Americans, tradition bearers, historians and scholars most familiar with northeast Michigan. Timothy Kuehnlein, the Heritage Grant project director and faculty member at Alpena Community College has been conducting the interviews along with Mary Ellen Jones, a filmmaker and writer with Mitten Women Productions, Inc. Both are founding members of MACNE and part of the planning team for the Lake Huron Discovery Tour.

“This is a fantastic opportunity to shed light on the rich history of our Native American heritage in northeast Michigan and share the Besser Museum’s extensive collection of artifacts and expertise through public libraries, schools and other cultural institutions along the US 23 Heritage Route,” said Besser Museum Executive Director Christine Witulski. “Updating our Native American exhibit has been on our wish list for some time and now we have this unique opportunity to do so in collaboration with the Lake Huron Discovery Tour, MACNE, the Community Foundation and the Michigan Humanities Council, an affiliate of the National Endowment for the Humanities,” Witulski concluded.