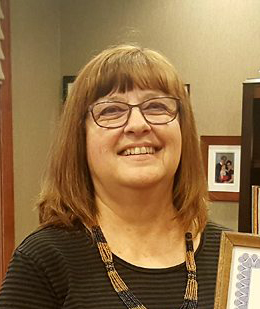 out-going president, and will continue on the Executive Committee as Past President.

“We have an incredibly dynamic board, representing every geographic corner of our service area,” said Patrick Heraghty, CFNEM Executive Director. “They are engaged, believe strongly in our mission, and are excited about the year to come.”

New Board of Trustees President, Christine Baumgardner (left), is a longtime resident of northeast Michigan, having moved to the area in 1970. She was the CEO of Alcona Health Centers from 1985 until her December 2017 retirement. Before that she served as the director of the Northeast Michigan Area Agency on Aging for seven years, and taught English at Alpena Community College for four years.

“CFNEM is an organization that is critical to the population of northeast Michigan. It serves so many communities and individuals too numerous to name, helping them improve their personal and community status,” said Baumgardner. “I look forward to bringing even greater participation by our community members in advancing worthwhile projects in our region. Our area is on the brink of great advancements that will help us, and at the same time, preserve the amazing resources we have.”
Baumgardner said she believes the Community Foundation can be both a motivator and a catalyst for change that enriches opportunities in northeast Michigan.

“Truly, this is an awesome responsibility and I am very honored, and humbled, to have that responsibility of being the CFNEM President bestowed upon me,” said Baumgardner.  “I have learned much from both the staff and the board members. They are all dedicated to the mission of CFNEM, and we will work together to build a bright future for northeast Michigan.”

New trustees are slated for election in June 2018.