When giving back comes from the heart, we find stories like that of Beach and Marianne (better known as Kellie) Hall. Rogers City has been their adopted hometown for almost 30 years, and they are deeply supportive of their community. With hearts for education, the environment, history, and health care, they have partnered with the Community Foundation to set the 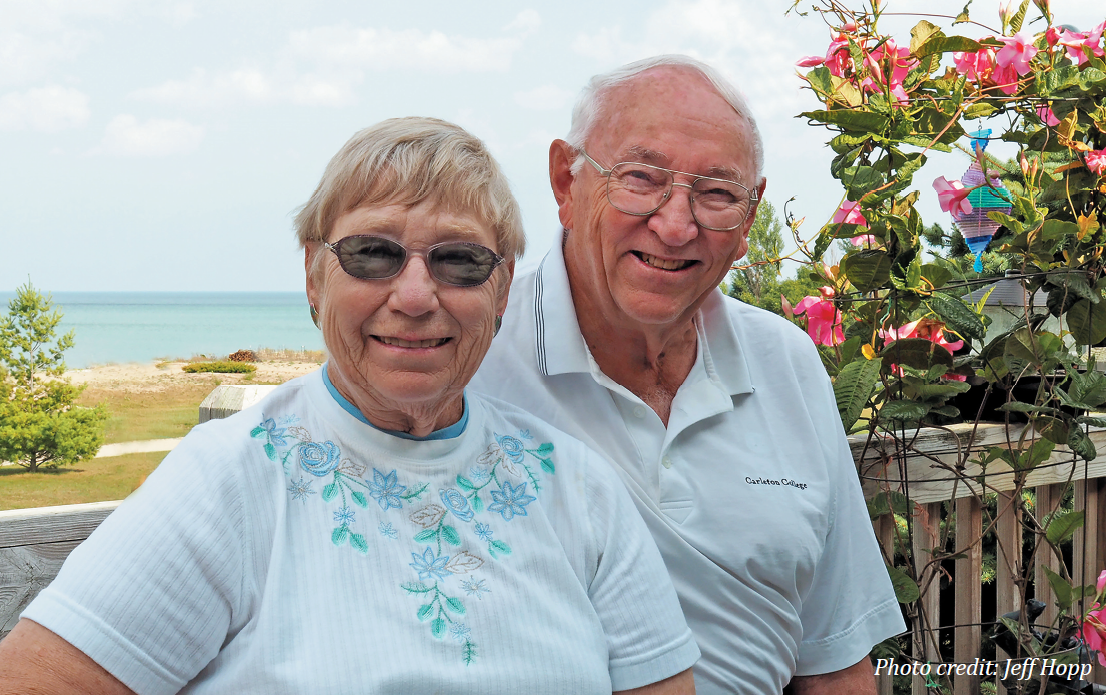 stage for preserving some of Rogers City’s best assets, as well as recognizing what the community and region lacks, and laying the foundation to address some of those needs.

“We think it’s important to give back,” says Beach. “We are all responsible for doing what we can to make our communities a better place.”

Beach and Kellie met at Carleton College in 1949 and were married five years later. They had three children, Ken, David and Veronica. While on a sailing excursion to the North Channel, Beach and Kellie discovered the lovely port town of Rogers City. They always knew they wanted to retire to “a real town” rather than a retirement community, and Rogers City fit the bill perfectly. They loved the marina that first welcomed them to Rogers City; they enjoyed the local theater for its movies and cultural events; and appreciated that there was an active Presbyterian church there. They also sought a place where they could find an affordable home on the lake. In 1982, they bought that perfect home and rented it out until they officially retired to Rogers City ten years later.

As new Rogers City residents, Beach and Kellie immersed themselves in the community. Beach ran for Rogers City Mayor and served for 12 years. Just a few years after moving to the area, he became involved with the Community Foundation for Northeast Michigan as a board member, serving as President in 2003. He is also involved on the boards of MidMichigan Health-Alpena, Alpena Community College Foundation, Thunder Bay Community Health Services, Presque Isle District Library, and Friends of Thunder Bay National Marine Sanctuary. Kellie says she is a “professional volunteer”, now giving time to the missions of Westminster Presbyterian Church and Carleton College.

Supporting the community they love, helping to sustain the best of it, and planning for its future has been the cornerstone of their philanthropic involvement with CFNEM. The couple has established several funds benefitting a range of needs in ways that make it a better place all-around.

The Rogers City Marina is the first place the Halls landed when they discovered Rogers City. They see the Marina, which is owned by the City, as an important community asset, greeting travelers by water, and providing a place for community members to enjoy the shoreline and Lake Huron. Another part of the community that added to their enjoyment over the years is the Rogers City Theater – a local landmark now owned by the Presque Isle District Library, and is a hub of community activities.

“You don’t have to have a million dollars to make your gift worthwhile,” says Kellie. “When you’re able to give back to your community, it’s a win-win.”

In 2019, as the Halls were working on the establishment of new funds to support the marina and theater, their son Ken passed away unexpectedly at the age of 60. Ken was a retired Navy officer, and then served as a civilian employee of the U.S. Strategic Command. Because the new funds the Halls were establishing coincided with their son’s interests, they decided to name them after Ken to memorialize and honor him. At the end of 2019, they officially established the Kenneth Hall Memorial Rogers City Marina Fund to enhance visitors’ experiences at the marina and maintain its adjacent Lakeside Park; and the Kenneth Hall Memorial Rogers City Theater Fund, to support the theater while it is under its present ownership.

The Halls say they choose to give through CFNEM because it is local, successful and easy to work with, and have chosen to be members of CFNEM’s Legacy Society, leaving a planned gift from their estate.

Beach. “It’s a good use of our funds; our heirs don’t need it; and it provides continuous support for what matters most to us.”

Along the lines of planning for the future, and through Beach’s involvement with the health care system both in his career and retirement, the Halls recognized a desperate need for medical professionals in northeast Michigan. They witnessed promising individuals going away to school and not coming back. With a deep hope of inspiring medical students to return home to serve northeast Michigan, the Halls created the Hall Presque Isle/MidMichigan Medical Center Alpena Medical Scholarship Fund for students from their county studying in the field of human medicine. To date, this fund has awarded $12,000 in scholarships.

Additionally, Beach’s terms as mayor and the couple’s community involvement led them to realize that Rogers City needed opportunities for arts and cultural events. As a result, they established the Hall Fund for Rogers City Arts and Education. They also started the Westminster Presbyterian Church Endowment Fund specifically to help the church fund its mission efforts; as well as the Beach and Marianne Hall Donor Advised Fund, which can provide funds for needs throughout the world.

“God has blessed our lives,” says Kellie. “We wanted to bless as many others as we could.” l